Here is how Wikipedia defines authority bias: “Authority bias is the tendency to attribute greater accuracy to the opinion of an authority figure (unrelated to its content) and be more influenced by that opinion.”

I have started to observe that authority bias has been silently sitting behind my mind, where I started to reject articles/blog posts from people I don’t think qualify to my authority standard.

The best example is of Paul Graham essays. They are well written and reach a standard where if you didn’t like the author it would be hard for you to trust what is written in the essay.

If the exact content is shown to me with a random person name on it, there is a high probability of me criticizing it rather than in case I know it is written by Paul Graham.

This is because his essays are so intriguing that I need some authority to validate the content. When Paul Graham writes those essays, I know while reading them that he is writing it based on his experience. But if a random person has experienced something exactly the same earlier in their life and they share it online, I would hesitate in believing the content.

In reading, there has to be some authority for people to start reading deeper into the article. But writers can counter this by writing well. If the content which you are doing is on an issue which most people want to know about and when they first time read your work they notice your style of writing to be good, then one can create authority bias for themselves in the minds of their audience.

Authority bias is a huge problem in the investing world. Especially in a bull run, the stock would start running up quickly and if a person you value recommends it, you would first buy the stock and later get into the research part (which is indirectly looking for validating statements).

I have been facing this problem for the last few months where I had entered stocks because people I respect had shared their positive thoughts on it. (This is the negative side of having a good network whom you respect xD)

I approached Abhishek Basumallick on ValuePickr for help and he gave me wonderful advice which now helped me minimize this bias. 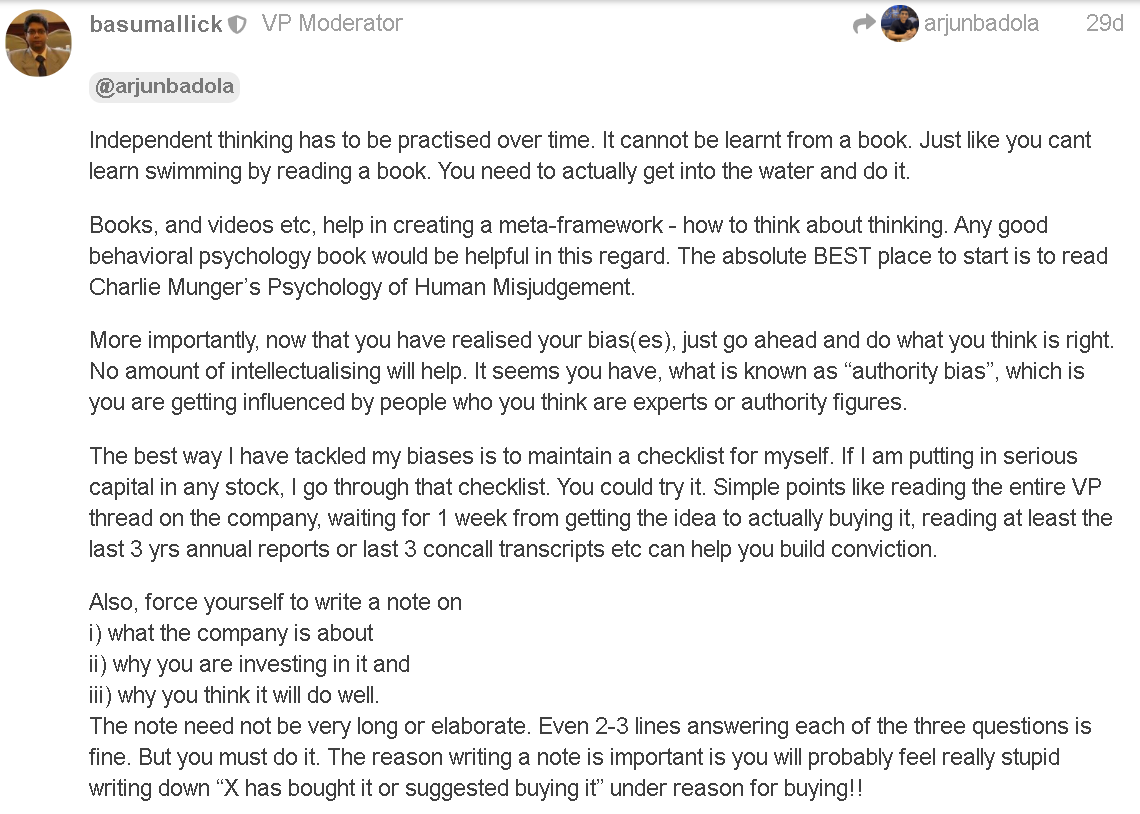 The advice which he shared was simple: Have a checklist and write down a brief note before buying.

Well I am yet to make a checklist but writing down a brief note is highly beneficial even though it looks like an obvious thing to do.

As I started writing down pointers on why to buy the company, I was point blank! For a few companies I didn’t even know their business model yet I was holding shares of the company, just because people I respect had shared their positive thoughts on it.

Now before buying any company I try to come up with 4-5 strong points to invest in and sometimes those points can be very strong to keep buying while you dig deeper.

Writing down your thesis pointers is highly beneficial to fight against the authority bias. I have been reading about it but never actually implemented it because I thought thinking in mind and writing it down on paper is the same thing. Trust me it’s not!