As you read more and more industries one starts to realize that most of the time a player is cheaper than its peers because of valid reasons.

But low multiples of that business makes you very biased to convince you to buy it.

Muthoot gets a higher multiple for the right reasons.

Muthoot even being on a higher base was outperforming Manappuram. Even the growth in recent quarters which Manappuram is showing has come when they decided to lower their yields. 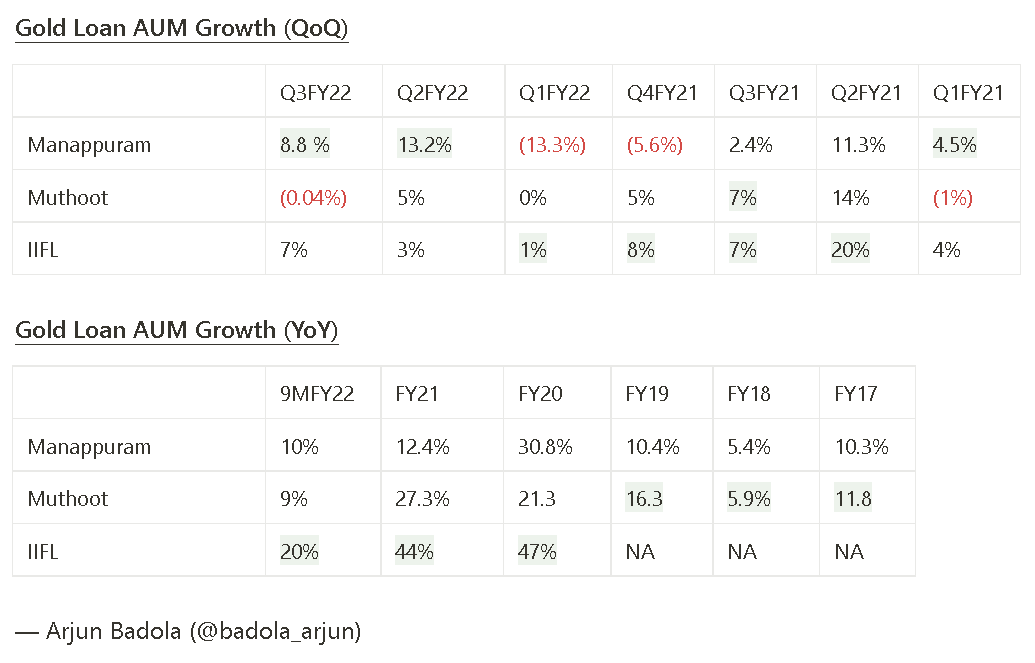 By listening to concall, every quarter there is a new excuse of their under-performance but their peers keep out performing!

It seems that the Manappuram gold loan franchise is weak compared to other players in the market and hence it trades at a cheaper valuation. The promoter has to prove that the business is strong enough to take market share, which is so far not happening.

This does not mean that Manappuram is a bad stock to own. Rather, it has its own risk to reward ratio but in that calculation, valuation should not be the only metric there.

Saregama trades at higher valuation for a reason.

I am not saying that TIPS can’t provide good returns but buying it because it is cheaper than Saregama would not be wise. TIPS has its own reason for which it can be bought.

Blindly buying IFGL over RHI just based on valuation, could be dangerous.

RHI trades at a premium for a reason.

The message I am trying to convey is that a company trading at a cheaper valuation than its peer cannot be your only rationale to buy the company.

One has to dive deep on the reasons for it being cheap and then interpret the possibilities of that changing in comparison with the leader. Then according to individual risk appetite the investor can decide whether to take the bet or not, because the stock, most of the time, would be CHEAP FOR A REASON.