Today’s post talks about the podcast I came across on the internet. Title being: “Scott Aaronson on “The theorem that proves rationalists can’t disagree”. So, I would be sharing my view on the podcast and relate it to my experiences.

The podcast talks about Aumann’s agreement theorem, which basically states that two rational people could never agree to disagree.

Now if the above assumptions work then when these two people are having a conversation they will update their beliefs while talking.

I believe 4th point is very crucial here. As without knowing what the other person common’s holds knowledge about would make it very difficult to agree on something.

I have a friend, let’s call him Mr. Left, who’s ideology, I am aware of, is towards politically left and I also consider him a honest and rational being, which means I value his opinion. Also, even he holds the same thinking towards me.

You guys might have noticed that whenever there is a debate between left and right political ideology it ends up into very toxic arguments. (At least this is what I have seen)

But I believe if the same thing is discussed by people who could fall under the assumptions of this theorem, the conversation would turn out to be very fruitful.

So, coming back to my example, now I have noticed that whenever I have a conversation with Mr. Left it has always ended with one of us either learning something, or pausing the conversation to continue later with relevant facts/materials required to take forward the conversation.

Now, lets try to fit Mr. Left into the assumptions required by the Anumann’s theorem.

So, for me personally, I think the theorem fits in. Therefore, it could be the reason that it is quite rare that I ever disagree with Mr. Left or vise-versa, even if we do after few hours we end up agreeing with each other.

So, why does this happen?

The creator of the podcast, Julia Galef, has wonderfully explained in this video on why this happens, i.e. why do rational people never agree to disagree.

So, if you have seen that video and understood it then you don’t need to read further.

Julia Galef calls it Meta-Updating and divides the conversation into two levels of updating.

Suppose I and Mr. Left are having a conversation of doing a project on Marxism and I hold an opinion that Mr. Left is rational and much more knowledgeable then me regarding this topic.

So, when I would propose an idea to work on within Marxism and Mr. Left rejects it then I would update my belief of the idea significantly towards Mr. Left’s opinion on why we should not pursue my idea.

And, if I update and agree with Mr. Left then this process would be Level 1 updating.

Suppose I and Mr. Left are having a conversation of doing a project on finance and Mr. Left holds an opinion that I am rational and much more knowledge then him regarding this topic.

So, I would propose an idea to work on within finance and Mr. Left first rejects it and lays down his reasons.

Now I believe that Mr. Left is rational and honest this would divert me slightly from my original position, but I still believe that I might be right as the topic is related to finance. So, I stick to my idea and again propose it to him.

Now, me sticking to my idea and rejecting Mr. Left’s opinion would make Mr. Left reconsider his decision as Mr. Left thinks that I am rational and I hold good knowledge about finance. Therefore, Mr. Left will update his belief and agree to my point of view related to this project.

This type of Updating is Level 2.

Now, just to connect it with investing here is something Prof. Sanjay Bakshi said: 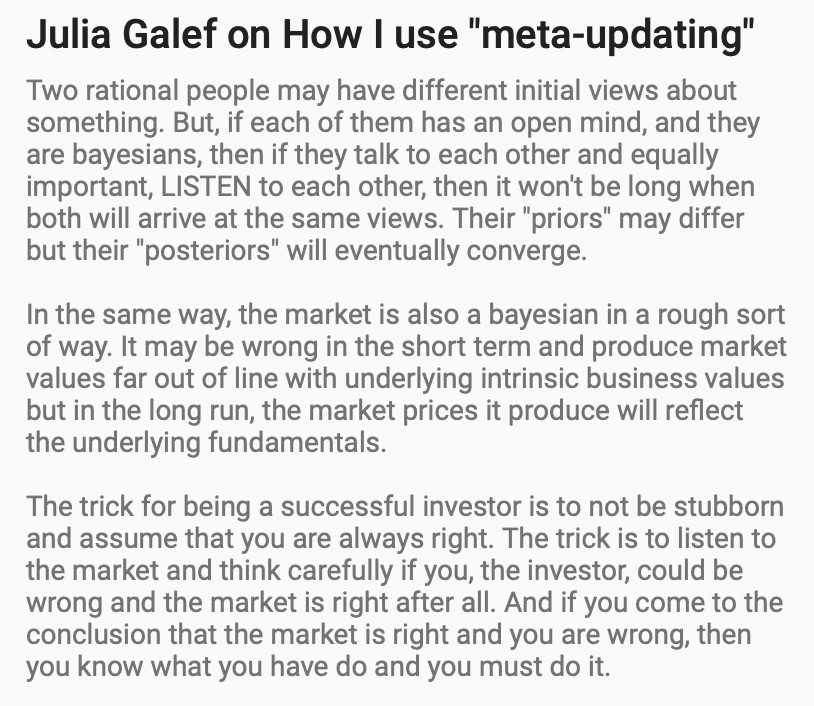