Warren Buffett is the guru of all investors and has shared his wisdom publicly which benefited many people. Most people start investing after reading about his story from which they get motivated and enter the realm of value investing. The problem starts when we blindly copy and misinterpret his statement which he shares publicly.

Warren Buffett quotes on investing have become quite dangerous. If one does not understand them with context, these quotes could act as a double edged sword for new investors entering the market.

Most of his quotes are to show the mindset and conviction one has to build while owning a business and not to start applying his quotes blindly. One has to be very cautious about such quotes in their early years.

Warren Buffett says that it might not be a great technique to wait for a crisis to buy a great business. Rather it’s just better to own them.

But here is the problem, there can be a lot of misinterpretation in his statement. Like he mentions that waiting for the price to be 90% of “x” (or fall of 10%) is not worth waiting for.

The idea behind making such statements is to show what type of mindset an investor should have. If one has analyzed a business and believes it to be a great business, waiting for 10% correction shouldn’t be the criteria because if your probability works out such a difference won’t matter in the long term.

But close attention should be paid when he mentions “unless you find the price really offensive and you have identified the company.”

Even after talking about a great company he mentions price as criteria. After creating an exception of price and assumption that the analyst knows it is a great company only then he proceeds further.

But the probability of a person having the capacity to fulfill the assumption is extremely low.

A great company is only identified in hindsight. Nobody knows beforehand that it is a great company. The only person who thinks that is the promoter themselves.

Let’s look at some Warren Buffett Quotes which lead many retail investors into trouble.

#1 “Our Favorite Holding Period Is Forever.”

This is one of the most misunderstood statements made by him.

New investors would enter the market buy FMCG stocks and then use this quote.

Nobody in this universe would ever hold a company for forever. The time has changed when most business models used to be capex heavy, highly brand driven, high advertisement cost, etc. were the only variables for exceptional business.

Such businesses exist even today but a lot less than previous times. The only reason being is that the business world keeps on changing. What is highly relevant today might not even exist 10 years down the line.

So holding a business for forever is an event with extremely less probability. It’s mostly luck when you find these companies, and after a certain period of time they would start compounding at a slower rate. If your capital is small, investing in such a style doesn’t seem to be the best choice.

I can’t recall the exact quote but it was something on averaging down, where if you liked a company at Rs.100 you should like it more at Rs.50.

Averaging down is a tough game to play.

Most of the times when a stock corrects significantly there is always a good reason behind it. If you start averaging down, the probability of you going wrong is high.

Daily stock prices won’t tell you anything about fundamentals but long term charts do suggest something.

Let’s look at some stock prices: 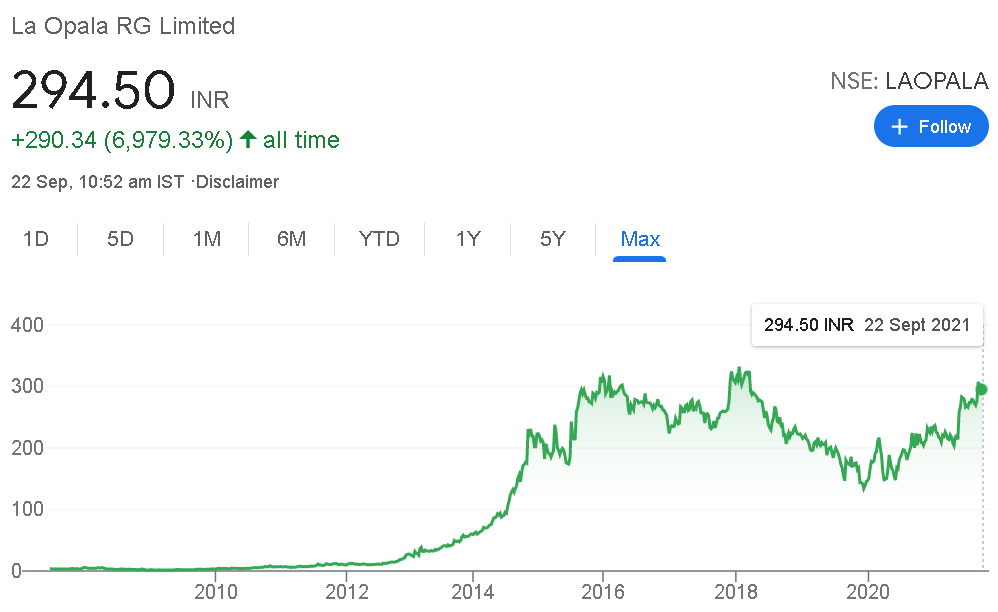 If you see the stock hasn’t moved anywhere since 2015, rather has gone down in between.

The reason being the growth from the business went away. From being a business with 20-30% growth it went to below 10% growth and even witnessed degrowth sometimes.

Here is another example where I was invested few months back: 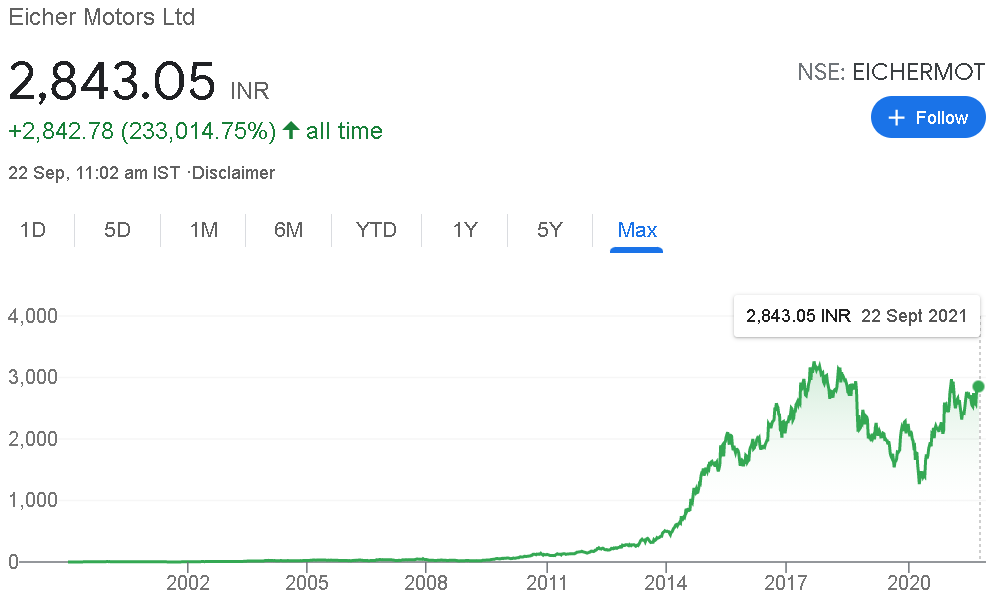 The business went through an exceptional growth phase till 2018 but then it hit the tipping point. The base itself became very huge and the industry came in with a lot of headwinds.

Now in both of the above examples if you were a new investor entering the market in 2018 and invested in this business without knowing that the growth triggers were no longer valid, but you start following Warren Buffett’s quote on averaging down, you would end up with negative returns till date.

Sanjoy Bhattacharya once gave a talk at CFA society and spoke about this same problem.

He further adds that we are not Warren Buffett, we don’t have his intellect, and neither we have his temperament to buy, but we all want to be Warren Buffett.

I have personally evolved from being a Cigar Butt approach investor to Moat investor and now who looks for Growth triggers and preferable industries with tailwinds.

Here is a good image which summaries the growth trigger to look for:

Another thing which I learnt is that investing for the long term is very difficult and one should not just enter a stock claiming that they would hold it for 10 years. Nobody knows what would happen between that period.

Rather, having a 2-3 years view where you see the earnings to double or grow at your expected rate is a better approach. As it is easier to understand the growth trigger for such a time period.

If you are a new investor in the market, please don’t read Warren Buffett quotes without understanding the context behind it and blindly apply them. It might have worked so far if you entered in 2020 but when the bull stops running you would be the first one to hit the wall.

If you want to learn from Warren Buffett, read about his three different phases of investing journey and adapt the one which is more relevant to you based on your size of capital and behavior. Rather than reading quotes on Twitter and replicating his style.

Update on 01 December 21: Found this uselful resource which highlights the point of this post: link