If you have been following my blog, I had written two articles talking about my decision of deleting WhatsApp and shifting to Signal.

I think I undermined the power of network effects while making that decision. You don’t need any degree or book to understand this moat. Just experience it around yourself.

I could survive only for a month without WhatsApp.

Investopedia defines the network effect as “a phenomenon whereby increased numbers of people or participants improve the value of a good or service.”

In simple terms, if more people use WhatsApp the better the experience will be because you would have all your friends to talk to on a single app which will make your process of chatting very convenient.

So, if more people with whom you want to talk to are present on WhatsApp exclusively then it is very unlikely that you would use any other app.

They have also started WhatsApp payments which will further make you depend on their app. Even though it would be convenient, but we know how its parent handles the user’s privacy. But WhatsApp was quite late to this payment system party which is now captured by Gpay & Paytm.

Therefore, if WhatsApp can do more of such things the deeper its moat will keep getting.

To be honest I was stuck. There is some weird problem in my phone that I couldn’t send SMS to anyone, which just amplified the need of downloading WhatsApp as everybody has it. There were times when a simple text message could do the job, but I had to call different people to coordinate.

WhatsApp has replaced SMS. The normal slang has changed from “text me” to “WhatsApp me”.

When you want to contact a person who is going to do you a favour (or, your boss) then you should preferably work in the way that is convenient for them (You can’t ask them to download some other texting app).

E.g.: If I am interning in a firm and my senior prefers communication over WhatsApp, I can’t ask them to switch to Signal because I don’t use WhatsApp. I am sure, senior would understand but it would just make things less convenient for them. Even though official communications happen through email most people where I have interned still prefer communicating over WhatsApp.

I feel the switch to Signal could have been less difficult if SMS on my phone worked but again it would be very inconvenient for the opposite party.

Further, coordination in groups become another problem. If the whole group already coordinates through a WhatsApp group, it’s very difficult to tell them to switch to another app.

So, the conversation just becomes dead.

E.g.: When I text someone about something exciting but didn’t share the full story because I waited for their reply to get full attention but by the time they replied (due to delay in notification) the excitement is over.

In case you are wondering why I don’t call; well, our generation is more of a text person than making a call.

If you are providing a service which is embedded into a person’s daily routine then any problem people face while using the service could affect your customers a lot, and if it happens too often then people will be forced to switch.

Something similar happened with Signal.

The sudden burst of so many users switching to it, their small team couldn’t handle so many request at once which led to various issues like message not sending due to huge traffic on the app, calling dropping off, or manufacturer purposely blocking notifications.

Moat not a Joke

Indeed, network effect moat is not a joke. I was under assumption that privacy concerns could really trigger people to make the switch towards a much more secure app but the cost to pay is high.

I myself who advocated for switching couldn’t handle the pressure and came back.

As it happens in businesses that over time by repetition of manufacturing process the management becomes aware of the unnecessary steps in the process and tries to eliminate it, which leads the process becoming super-efficient over time.

Same goes for humans too.

People have got so efficient with the use of WhatsApp that changing the tool of texting could hamper their efficiency.

WhatsApp has become a business which has all your data, it’s a service you can’t live without, it’s getting integrated into essential services, and is super convenient.

Even Snapchat had commented something on India due to which they had backlash, but everything returned to normal.

A company whose business model works on a network effects model, once reaches the scale of sustainability it enters the virtuous cycle.

Here is an example based on the virtuous cycle of Data: 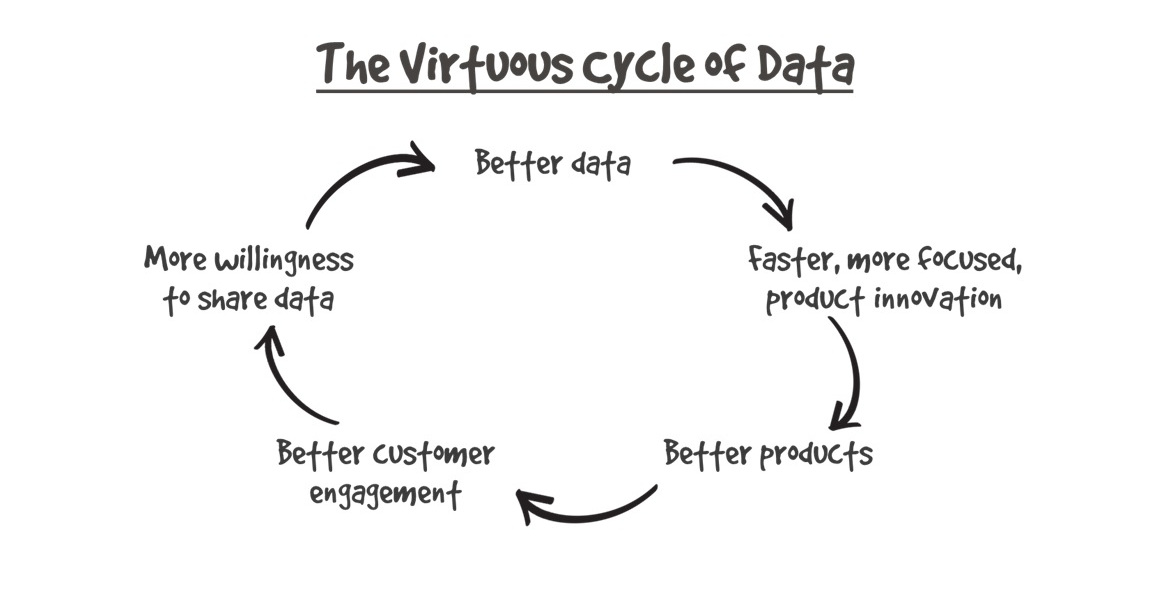 Therefore, once a company enters the virtuous cycle it is very difficult to break its business model.

WhatsApp is here to stay. The longer people take to get aware about the privacy concern the more time such companies get time to deepen their moats which is good for the investors but bad for the customers. Even after people do get aware about the concerns still, they must fight against the layer of convenience and effort. But eventually people just give in, me being one of the examples.